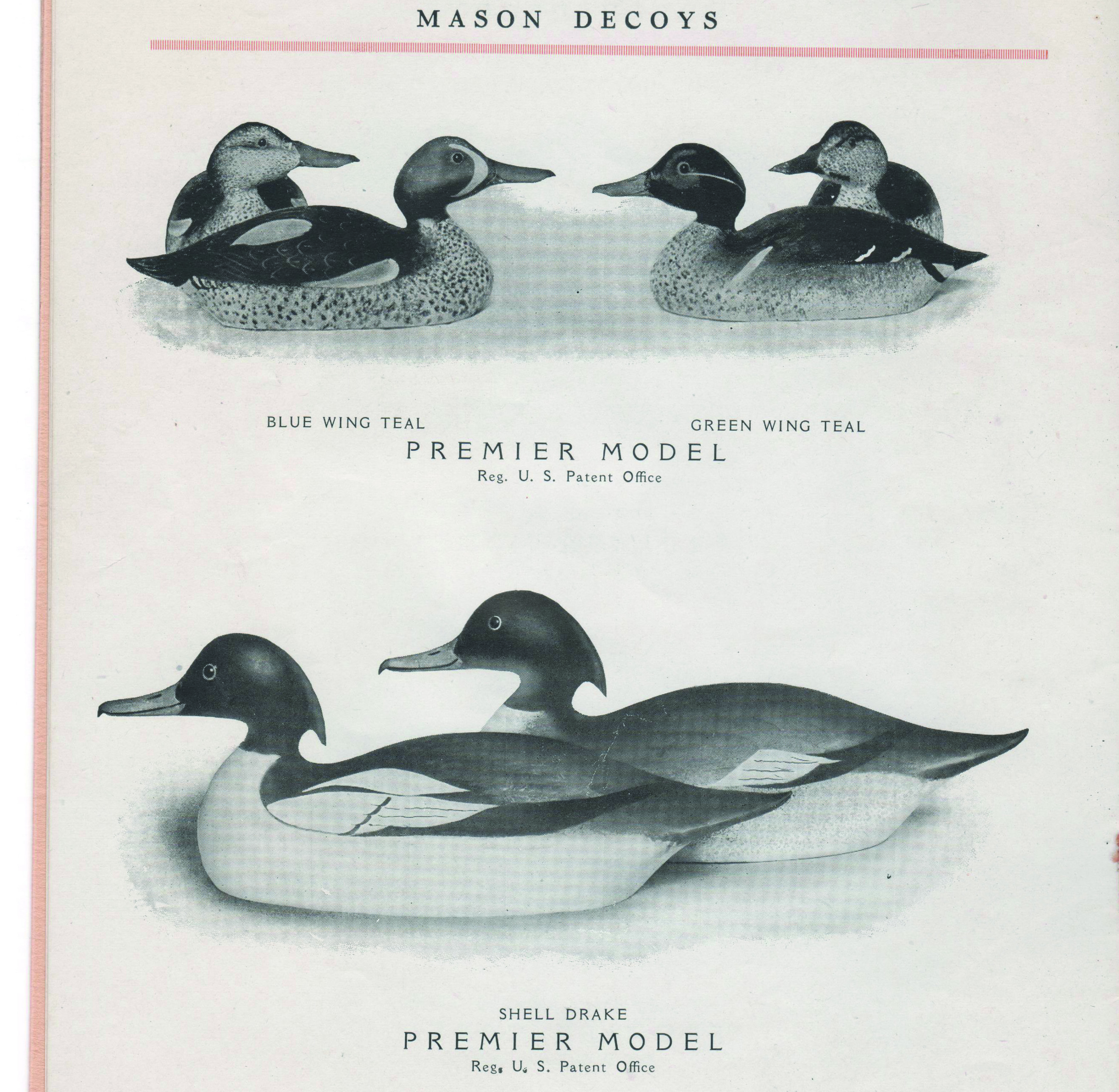 An Irish immigrant who settled in Detroit, William J. Mason started making handmade decoys in the late 1880s. By 1896, Mason was working as a full time decoy maker in a shed behind his house. Mason combined the best qualities of the Peterson and Dodge decoys with his own personal observations of feather patterns. His early hand carved decoys with their snakey heads resembled Peterson's. In 1903, Mason began producing decoys on a lathe with high quality Michigan cedar properly cured and air dried so that the blocks would not split and the paint would not peel.

An assembly line operation involved a series of events. First, the cedar was cut to length with the bandsaw, after which bodies and heads were formed on a tracing lathe. Next, the heads were hand finished, attached to a dowel, and glued into the bodies. Then the decoys were finished and painted. The neck filler was put in, the decoy was painted with a mixture of linseed oil, turpentine and white lead by an apprentice painter, and finally a senior painter applied the final coats of paint. After Mason died in 1905, his son Herbert took over the business. By a combination of a great product, business acumen, and advertising, Herbert Mason made Mason's Decoy Factory into a phenomenon in the history of duck decoys.

Prior to William Mason's death, Mason's produced only the Challenge Grade and Premier Grade decoys. Herbert Mason expanded the product line to include lower priced Standard Grade models of three types: painted eye, tack eye, and glass eye. Thousands of the Standard Grade decoys were distributed to Sears and Roebuck and Von Lengercke & Antoine in Chicago, and Mason Decoys became a name product across North America.

The business was so successful that Herbert Mason moved the factory to its final location near railway access in 1915. In 1919, Herbert Mason went into partnership in a paint business that became the largest supplier of paint for a growing automotive industry. By 1924, the seasonal nature of the decoy business versus his increasing interest in the paint business caused Herbert Mason to stop decoy production and close Mason Decoy Factory. The inventory not sold by department stores was given away, trashed, or burned.

Many Mason decoys are still in working condition. Their continuing popularity and durability is owed to the Mason carvers who took pride in their work and created the best product possible. There is nothing fancy about Mason decoys, but the shape of a head, arch of a neck or detailed bill carving keep these decoys from being ordinary. Earlier models have chubby faces, flat bottoms and a pronounced slope of the breast. On later models, the breast is less exaggerated and the decoys have an overall sleeker look. Over the years, the paint jobs done by hand remained consistently superior with blended colors under dotted, spattered, stippled and streaked designs.

The world auction record for the Mason Decoy Factory is a premier grade wood duck that Guyette & Deeter sold for $690,000 in 2014.